Mathematically the average/ mean arterial pressure MAP = CO*SVR. Cardiac output units of flow are litres per minute. The cardiac output is the product of the stroke volume ejected per beat times the heart rate (beats per minute). The first arterial blood pressure measurement was made in 1733 (by Hale).

Is the low blood pressure a consequence of heart failure, low blood volume or a change in vascular resistance to blood flow? Concurrently measuring the cardiac output and the arterial blood pressure allows the judgment of a more appropriately choice of corrective intervention. Suitable interventions could include administering fluids – to fill up the vascular volume, giving drugs to support the heart’s strength of contraction or administration of vasoactive drugs to reduce or increase arterial resistance.

The ease of measuring arterial pressure has meant that the clinical diagnosis and management of the adequacy of the circulation has until this day been very pressure centric.

Arterial pressure has been used as a surrogate measure of cardiac output. Ideally, diagnostic and clinical decisions concerning the circulation would be based on a full understanding of the drivers of clinically relevant hypo- and hypertensive events observed while monitoring arterial pressure.

The goal has been to simultaneously measure cardiac output, blood pressure vascular and systemic resistance.

Not surprisingly the search has been on for a simple method that could provide continuous cardiac output measurements in patients during surgery and in shock. Adolf Fick made the first accurate measurement of cardiac output in 1870. Unfortunately, measuring the cardiac output proved to be not as easy as measuring arterial blood pressure. The Fick method proved to be cumbersome and not very practical for most clinical situations.

Otto Frank (1899) was the first person to develop a mathematical model for describing the circulation and the relationship between blood pressure and blood flow. He formulated the concept of the two-element Windkessel model (air chamber/elastic reservoir), which described the shape of the arterial pressure waveform in terms of resistance and compliance elements.

His model draws similarities between the heart and the arterial system to a closed hydraulic circuit comprised of a water pump connected to a mixed air and water filled chamber. As water is pumped into the chamber, the water compresses the air in the pocket and simultaneously pushes water out of the chamber, back to the pump. The compression of air simulates the elasticity and extensibility (arterial compliance) of the aorta, as blood is pumped into it from the heart.

The resistance that the water overcomes to leave the Windkessel, simulates the resistance to flow encountered by the blood as it flows through the major and minor arteries/ arterioles to the capillaries. Functionally, the Windkessel/ elastic reservoir effect of the major arteries dampens the fluctuation in blood pressure that would otherwise occur if blood was pumped into a stiff and less compliant arterial system.

During diastole the stored blood in the aorta and its associated driving pressure, assists in the maintenance of a continuous blood flow away from the heart to the periphery, thereby ensuring consistent end organ perfusion pressure and oxygen transport. This circulation model was improved by Broemser (1930) who proposed a modified 3-element model, which added a second resistive element to the 2-element Windkessel model between the pump and the air chamber, thereby simulating the resistance to blood flow encountered across the aortic valve.

Frank’s circulatory model and its subsequent refinement led to a number of attempts to derive the stroke volume from more complex Windkessel-like models of the circulation (Kouchoukos, 1970 & Wesseling 1993). These techniques became collectively known as “Pulse Contour” methods of deriving stroke volume and cardiac output from the arterial pressure.

The PulseCO™ algorithm method is based on the principles of conservation of mass and power. Stroke volume is calculated from an analysis of the stroke volume induced pulsatile change in the pressure waveform. It is important to note that this is not a Pulse Contour or modified Windkessel approach, but rather a different and novel non-morphological approach.

The PulseCO™ method overcomes the limitations of the more historic approaches that were reported to be compromised by the variable contribution of the arterial reflected wave and resistance changes that can occur in peripheral arteries.

Briefly, the PulseCO™ analysis transforms the arterial waveform from pressure to a volume equivalent through a compliance and aortic volume correction maneuver. Autocorrelation of the volume waveform derives the beat period (heart rate) and input pulsatile volume change i.e. stroke volume. Cardiac output is derived by multiplying the stroke volume by the heart rate.

The LiDCOplus and the LiDCOrapid monitors both use identical implementations of the PulseCO™ algorithm. The algorithm derives the pre-calibration cardiac output i.e. CO Algorithm (COa) in exactly the same way in both products.

The COa is then calibrated i.e. made more accurate by scaling with a calibration factor (CF). This is achieved by entering the CO known (COk) into the monitor. The CF is calculated in both products in exactly the same way CF = COk/COa.

The LiDCOrapid can also derive the CF via a nomogram, which calculates the CF from the patient’s age, height and weight. In this case, the displayed cardiac output is then equal to the CF x COa.

Problems addressed that limited the precision of morphology (pulse pressure/systolic area) approaches
• Morphology-based approaches (Windkessel & Pulse Contour) may have difficulties finding the systolic area;
• Reflected pressure waves – can move into the systolic part of the waveform with vasoconstriction & further away with vasodilation increasing or decreasing the area of pressure waveform analysed;
• Frequent recalibration – after a significant change in hemodynamics is required
Strengths of the PulseCO™ autocorrelation approach;
• The power and energy components are conserved within the beat data despite vasoconstriction or dilation, so changes in waveform morphology & shape do not affect the autocorrelation measurement of stroke volume;
• Arterial line damping/ changes in frequency response do not affect the measurement;
• Frequent recalibration – after a significant change in hemodynamics – is not required.

What is the precision/trending ability of the core PulseCO™ pulse power/autocorrelation algorithm to follow changes in stroke volume & cardiac output?

The software code of the core LiDCO pressure waveform algorithm (PulseCO), as used in the original PulseCO™, LiDCOplus and now LiDCOrapid Monitors, has remained completely unchanged since the launch of the first PulseCO™ monitor in 2001. This means that all the 100 or so papers and abstracts published on the performance of the core PulseCO™ software are comparable and still relevant. 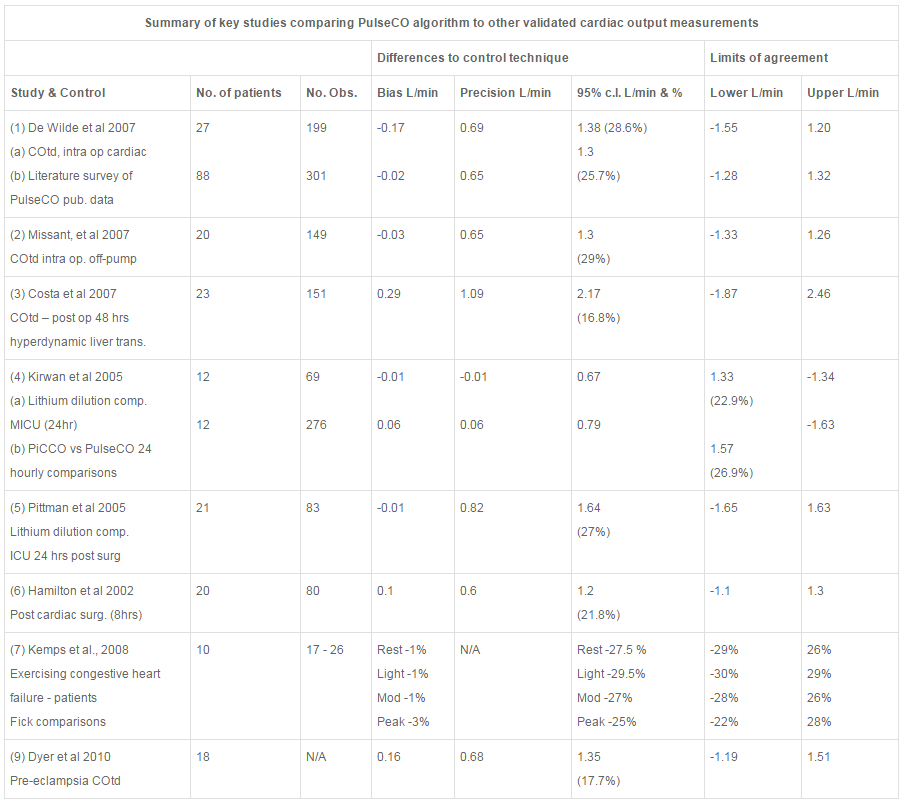 The data shown above in the table are derived from the statistical analysis of repeated paired measures at differing cardiac outputs from multiple patients. The statistics used assumes each pair of measurements are fully independent of each other (conventional method). In fact, they are not fully independent as they are actually multiple measures taken within a single patient.

This is known as the consecutive change method of analysis. This form of analysis was used in the paper published by Wilde et al. 2007. Some of their results are shown below. The advantage of this consecutive change analysis method is that it can be used to quantify the concordance (another way of looking at the trending ability) between the two techniques. It can be seen that 88% of the relative change comparison points are seen to be falling in the upper right and lower left quadrants of the plot.

This analysis allowed Wilde et al. to state that 88% of all changes in cardiac output of greater than 0.5l/min were similarly detected by the two methods i.e. PulseCO and the control thermodilution measurements.

Un-monitored attempts at central blood volume expansion can be dangerous.
Because blood volume cannot be reliably assessed clinically, the likelihood of hemodynamic response (preload responsiveness) and the actual magnitude of the response to a volume challenge (cardiac output/ stroke volume response) have replaced the use of static volume parameters such as; mean arterial pressure, central venous pressure (CVP) or pulmonary capillary wedge pressure (PCWP).
Arterial preload responsiveness parameters have been calculated manually from arterial blood pressure displayed monitors since at least the late 1960’s. Automated display of; systolic pressure variation (SPV), pulse pressure variation (PPV%), stroke volume variation (SVV%) and stroke volume response (∆SV) are now increasingly used to guide fluid management in the arterial line patient and their protocolized use has been shown to lead to improvements in outcome. (Lopes et al. 2007).

The preload response parameters reported by the LiDCOrapid are all mathematically derived from the PulseCO™ algorithm’s primary measured parameters. They have been independently validated to be appropriately sensitive, specific and precise. When used as diagnostic aids in a fluid management protocol they have been associated with improved outcome in high-risk surgery and transplantation applications.

Therefore, LiDCO’s baseline PPV% & SVV% provided useful information about the patients’ position on an individual Starling curve. The greater the PPV% & SVV%, the more likely the patient was to be responsive to ventricular fluid loading. Finally, in the fluid responder group, the mean PPV% & SVV% were significantly lower after the fluid challenge compared with baseline values, indicating a change in their volume status after fluid administration.

“PCO-LiDCO technology used in this study provided reliable measurements of PPV%, SVV%, and SPV. A further advantage of this technique was that it only required peripheral intravenous and arterial access, both of which are commonly placed for perioperative care.”

“SVV, PPV and SPV of PulseCO are good predictors of Fluid Responsiveness in fully sedated and mechanically ventilated patients in the intensive care.”

Effects of vasoactive drugs on PPV%/ SVV%. A key question for pressure waveform analysis methods has been their robustness in the presence of vasoactive administration – Hadian et al. 2010 investigated the effects of vasoactive therapy on LIDCO’s PPV% and SVV%. Seventy-one paired events were studied – 38 vasodilators, 10 vasoconstrictor & 14 inotrope administrations. As expected, vasodilator therapy increased PPV% and SVV% from 13% to 17% and 9 to 15% respectively (P < 0.001). Whereas, increasing inotropes or vasoconstriction did not alter PPV% and SVV%. The authors’ conclusion was “ Thus, SVV% and PPV% can be used to drive fluid resuscitation algorithms in the setting of changing vasoactive drug therapy”.

Their conclusions were that the:

“LiDCOrapid PPV measurement demonstrated a high degree of correlation with the Philips Intellivue MP50 PPV values. Use of either monitor should generate accurate measurements of continuous PPV to guide fluid resuscitation.”

No fluid responsiveness parameter is 100% accurate in predicting the magnitude of the fluid response. The increase in stroke volume needs to be> 10% for a 200 ml infusion, or the hemodilution effects will override the flow increase resulting in a net decrease in oxygen delivery. Therefore a very necessary safety check is for the clinician to monitor the fluid response itself (% change in blood flow/stroke volume) to the fluid administration. Trended stroke volume response (∆SV) should be displayed in order that the user can reassure them that the response is proportionate to the volume of fluid infused.

The LiDCOrapid monitor shows both trended changes in SVV% or PPV% and ∆SV in response to fluid challenges to increase stroke volume – see below for an example: 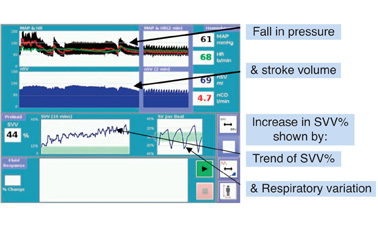 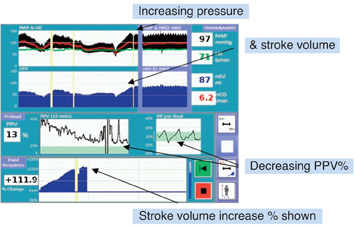 The absolute precision of the PulseCO™ algorithm for discerning the small stroke volume changes necessary to detect small changes in SVV% and ∆SV was investigated at Pittsburgh University by Marquez et al. 2008. The PulseCO™ derived stroke volume changes following an inferior vena cava occlusion were compared to flow changes measured with an aortic electromagnetic flow probe.

They further showed that patients with a > 5% improvement of stroke volume performed better at 2-month follow-up clinics in terms of length of 6 min walk, and improvement in their echocardiographic dyssynchrony profile.